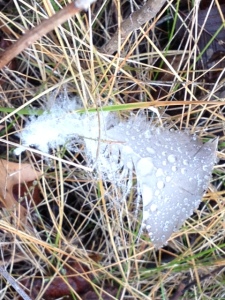 I spent the past three days at the Institute of Liturgical Studies at Valparaiso University. The Institute is an annual conference that explores the intersection of theology, liturgical practice, and music. I always look forward to the Institute and have been attending since 1992. This year’s theme, Sing a New Song: The Cosmos in Praise and Lament, was of great interest to me. It did not disappoint. Larry Rasmussen, a social ethicist, Mary Louise Bringle, a hymn writer and professor of religious studies, and Ben Stewart, a liturgical theologian informed and challenged us in our vocation to care for the earth in deed and in worship.

I had the honor of preaching at the closing eucharist, a service in which we began to explore how liturgy might form us in our work of creation care. The following is the text of the sermon I preached based on 2 Corinthians 6:1-13 and Mark 4:35-41.

You think you’re in charge until you find out you’re not.

Like when you’ve reserved the bouncy house for the church picnic and encouraged all the families with their kids to show up, and it’s 30 minutes before the picnic is supposed to begin, and when you finally reach someone at Bouncy-Houses R Us, you find out they have delivered and set up said bouncy house at Grace Bible Church instead of Grace Lutheran Church. There is a certain terror attached to that scenario, a certain panic, in the long run not that important, though beads of sweat still break out on my forehead when I tell the story.

You think you’re in charge until you find out you’re not.

When crisis hits, like a storm on the Sea of Galilee, you discover what was really true all the time, that you are not in charge. The winds begin to blow — hard — the waves become overpowering and begin to swamp the boat. And you, wise, experienced, sailing-savvy fisherman see death staring you in the face, because you know that in this moment, the wind and the sea are in charge, and they hold the power of life and death.

The disciples reach out to Jesus in a panic. Not, I believe, a cry of hope, but overlapping cries of irritation, frustration, and desperation.

The terror-stricken disciples have come face to face with the fact that they are not in charge; by all appearances those life-threatening forces of nature are. And then everything changes. Stuck in the jaws of death, they discover that the one in the boat is more in charge than they know. Waking up from sleep, a simple, commanding word from Jesus calms the winds and the waves.  Jesus is the king of the created order. There’s nothing to fear. He rebukes that which threatens life; his word gives the peace that it calls for.

When it comes to life on this small boat of a planet, a boat increasingly storm-tossed— figuratively and literally — just who is in charge?  For a couple of centuries, we’ve believed and acted as if we are. We’ve been quite impressed with our capacity to harness the unpredictable forces of the natural world and steer them according to our wants and needs. It’s been like grabbing hold of the steering wheel of a great planetary BMW M5, a little crazy at times, but exhilarating, the ultimate driving machine.  This exhilarating drive of economic and technological progress, fueled by an astonishingly rapid burn of fossil fuels has led to a life of ease and convenience for those of us in the room, though not for everyone on the boat, certainly not those of the empty chairs [a reference to Dr. Larry Rasmussen’s plenary session on Tuesday, April 14, at which he placed 3 empty chairs on the podium to represent those impacted by climate change who have no voice, namely, the poor, the creatures, and the earth itself]. Until very recently, we thought it could go on forever.  You think you’re in charge until you find out you’re not.

We have let loose a destructive genie that can no longer be put back in the bottle. We — not just the corporations and governments and systems and other easy punching bags that we like to take our swings at — all of us, thousands upon thousands of us with our thousands upon thousands of daily decisions betray our bowing down at the altars of different gods, gods of consumerism and materialism and convenience, a worship that is killing the planet. In a creation full of life, we have been agents of death, because we thought we were in charge.

We should not be surprised. Holy history has shown us that being in charge is a burden we strive for but cannot bear. When we claim control it leads to nothing but death. Our first parents wanted to be in charge of the Garden and so came the fall and the curse. The Children of Promise wanted to be in charge through the 40-year journey to the Promised Land, repeatedly unwilling to trust God’s provision and repeatedly victims of their own rebellion.  Oh, the tragic and painful truth embedded in the first words carved on the stone tablet: you shall have no other gods.

Those words spoken from the boat changed a precarious situation for the disciples in the boat with Jesus. But only for that moment in time. What changed everything for all time and all eternity, was not a word, but a sorrowful and painful silence.  Not in the stern of that wooden boat, but on the wooden crosspiece of a cruel tree came the silence of the dying one as he breathed his last, and the horrifying silence of abandonment. The silence of his death was the death-knell to death itself. Redemption was accomplished and reconciliation begun in his self-giving love. The empty tomb is the exclamation point to God’s lively intentions for you, for us, and for all creation.

Before this little boat ride, the disciples were students at a hillside seminar on faith, illustrated by a series of folksy stories. Now, after the storm, Jesus asks some penetrating questions about the relationship of their own experience in the boat to faith. Why are you so afraid? Jesus asks. Why do you have so little faith?

Faith is the gift of trust within a properly ordered relationship between Creator and creature. Faith is the gift of knowing that the Creator, the one who has given us life in the Crucified and Risen One is faithful. Not only does that faith cast away the fear that is at the heart of wanting to be in charge, it changes our perspective on and relationship to everything, including our work for the care of the earth. The ones in charge say, “This is a commodity. How can it be used?”  Faith says, “This is a sacred gift. How shall it be cared for?”  Faith issues in eucharistic living, giving thanks for the goodness of the One who has given life, who has given new life, and who now empowers a new way of living. Thankful for this gift of life, we cannot help but be agents of that life for all our creaturely neighbors, even for this holy Mother Earth herself.

Now, let’s be clear; we do not sing a song of progressive optimism that ignores the challenges and say that things will just keep getting better and better. Our song and prayer will often be lament.  Paul had a wide-eyed honesty about the difficulty of his work for the sake of Christ. Persecuted, abused, sorrowful, empty, even dying. Yet, in the midst of that struggle, Paul exudes a confident hopefulness, even joy as he gives his life to his holy work.  The work is hard; it is urgent. But eucharistic living knows no other way; not complacency, apathy, or even resignation to a future that holds only death. Eucharistic living works, loves, and cares, for God’s sake and for the sake of all our neighbors.

Eucharistic living flows from the table to which we will soon be invited. The bread and wine which we will offer is the stuff of the earth. The bread and wine come to us as gift of the Creator.  Shaped by our hands, we offer them for God’s use. By God’s word and promise, we receive this stuff of the earth as the gift of salvation. And then we offer ourselves back to God. It is a properly ordered, grace-filled  relationship — Creator, creature, Christ the Mediator offering himself to us yet again. Then we will go from that table to the table of the world, recognizing in the earthly things a sign and sacrament of a loving Creator. What happens here becomes the pattern for what happens out there, reverently, lovingly, graciously and gratefully receiving the things of earth and offering them back to God.

At Faith Church in Glen Ellyn, as part of our formation for our young brothers and sisters to receive Christ in the Holy Communion, they are asked to reflect on that experience of receiving communion. “What will be different for you now that you will be receiving communion?” they are asked. The question is remarkably similar to the question Fred Niedner asked us at the end of the final plenary session, “What difference will it make that you were at this Institute,” and I might add that you have been in this assembly, at this font and this table? Let me tell you how one of our fifth grade theologians answered that question.  “Now I won’t just be hearing the story, I’ll be in the story.”