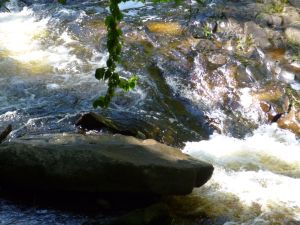 In this space last week, I reflected on the story of the Great Flood, suggesting that, above all, it’s a story about God and not about floods and geology and arks and animals. In that post I argued for a view of God that is based, not on God’s anger, but God’s grief over human sin.

When we get to the other side of the The Great Flood, Noah and his family have been spared and God makes a promise never to abandon that which God has created.

One of the startling reports from the Genesis text is that before and after, nothing has changed on the part of humanity. Before the Flood, God “saw that the wickedness of humanity was great in the earth.” (6:5); after the Flood, God still makes the same judgment, “for the intention of man’s heart is evil from his youth.” (8:21)  The cataclysm of a great flood has done nothing to change the inclination of humanity to rebel against God’s purpose and will. If there is any hope for the future, it will not be found in any change in the human heart apart from the touch of the love and grace of God.  Hope for the future depends on God doing something. Human beings are not, apparently, capable of saving themselves. We cannot, in the end, rise above our calculated self-interest.

Yet this humanity that has been created in God’s image is still regarded by God as good. God yet gives an affirmation about the value and the dignity of human life and human work. “Never again,” is what God says. (9:11)  What has changed is not anything in the human heart. What has changed is the heart of God.

What has also changed is the formula. We seem to be hard-wired for a formula that says wrongdoing must exact a proportional punishment.  An eye for an eye, and all that.  But in the Flood story, God breaks the one to one connection between guilt and punishment. Death and destruction are still real; evil has not disappeared. But after the Flood, death and destruction are no longer rooted in the anger of God, and they are not God’s necessary and inevitable response to wrongdoing.

These reflections are particularly timely for a couple of reasons. First, in the church, we are coming close to the annual Holy Week commemoration of the events of Christ’s last week, culminating in his crucifixion, death, and resurrection. I still hear, far too often, about Christ’s death as the punishment wrought by an angry God for the sin of humanity. It’s just not a helpful way to talk about or think about Christ’s death, nor is it consistent with the picture of God that courses through Scripture, going all the way back to what we learn about God from from the Flood.  Christ’s death and resurrection certainly bring salvation to all humanity, but not in the one-dimensional “payment to an angry Father” schema that is so pervasive in popular western Christianity.

Second, I think it’s particularly important to say in a world where violence and retribution hold sway. The picture of God presented here, a picture which finds its fulfillment and sharpest focus in Jesus, offers another way for us to live together. It is not necessary that punishment be meted out in proportion to the crime, especially when punishment is not a deterrent, and when the drive for punishment completely overshadows any thought of rehabilitation. The current world stage is as much proof as we need that retribution solves nothing; in fact, it serves to escalate the violence and increase the suffering and death of mostly innocent people.  Early yesterday morning, two police officers were shot outside the Ferguson, Missouri City Hall. Retribution? You kill one of ours and we’ll kill one of yours?  Who knows? We still haven’t shed our tendency toward violence and bloodshed; it must still grieve God.

For all of that, I’m grateful to be on the receiving end of a gracious God and still hope that in the peaceable kingdom that is coming in our midst, the same grace might have something to do with how we live with each other.