I was driving back home from Chicago yesterday afternoon, alternating my listening between NPR, James Taylor, and the Hamilton soundtrack. Wisconsin Public Radio reported that this year it costs six cents less than last year for the Fourth of July cookout of hot dogs and potato salad for you and 9 of your best friends.  Good to know.

The Hamilton soundtrack was a good reminder the precarious beginning of this aging republic. Few contemporaries gave those colonial revolutionaries much of a chance. The ragtag continental army was outmanned and out-resourced. No way they should have won. Yet they did.

The end of the war was not the end of the teetering on the edge of the cliff. If winning the revolution was hard, figuring out how to govern was even more difficult. It took nearly 5 years for all 13 colonies to ratify the Articles of Confederation.  That first constitution was a flawed document, and in 1787 they came back together for contentious debate that gave birth to our present constitution. I suppose we are still fighting that same battle between the power of the states and the power of the federal government.

Those men were trying to find the best governmental structure to make possible the grand democratic ideals they had written into the Declaration of Independence “that all men are created equal, that they are endowed by their Creator with certain unalienable Rights, that among these are Life, Liberty and the pursuit of Happiness.”

They are grand ideals, to be sure, ideals which we still struggle to put into practice. It’s still true that some are more equal to others. While we have made progress, there is still much work to be done.

NPR also ran a story yesterday afternoon about the current status of the Black Lives Matter movement. One of the founders talked about the difficulty of sustaining the movement when victories are so rare and when the struggles of minority communities are multiplying.

And my little annual ritual of remembrance on this Independence Day gives me an opportunity to recommit myself not to give up and not to settle into the comfort of my privilege. There is still work to do. The American republic assumes assumes citizen engagement. We form relationships and build networks of bonds with our neighbors and other fellow citizens. We engage in our communities to discover the struggles and concerns we share, and when something is wrong, we engage to make it better. We bring to the table the power of ordinary people who care enough to take action. Then we act. There may be no more patriotic thing to do.

It feels to me like these are politically dark times for this 241 year old republic. I’ve decided I’m not going to dwell on the things I can’t do anything about. I can’t do anything about the petulant tweets of our adolescent in chief, or about the representatives on both sides of the aisle whose loyalty is primarily to the big money that put them there and whose primary goal is to hold onto their power.

Here’s what I can do.  I can work to build a better community where I live. I can work with others to enact the ideals that we celebrate today, the virtues of an informed citizenry that works together for the common good. In the preamble to the constitution that was eventually ratified, the founding fathers had a vision that in this land we would work together to “insure domestic Tranquility, provide for the common defence, promote the general Welfare, and secure the Blessings of Liberty to ourselves and our Posterity.” Still sounds pretty good to me.  Happy Independence Day! 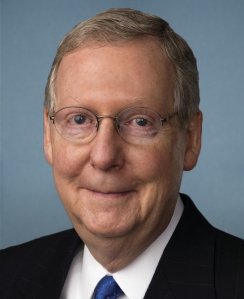 You are a demagogue.

I don’t say that lightly. It is against my nature to disparage another’s character.

But I can come to no other conclusion.

You are the one who, as a Senator, charged with doing the business of the country, of keeping in mind the common good, publicly divulged in 2009 that your primary legislative goal was to make sure that Barack Obama was a one-term president.

Now, on March 31, the last day to sign up for healthcare under the Affordable Care Act, you publicly say that the very same act is a “national catastrophe.”

The Affordable Care Act now has over 7 million sign-ons. How many of those have health insurance for the first time won’t be known for several weeks. Still, even by the most conservative and critical estimates, millions of people who previously did not have health care coverage now do. We have finally begun to catch up with the other developed nations when it comes to making sure that every one of our citizens has access to healthcare. And to make sure that the cost of the healthcare is evenly distributed.

Now Sen. McConnell, you may not agree with the methodology. You may wish it had come down differently. Frankly, I agree with you. i don’t think this is the be-all, end-all. I wish it had been crafted differently. Still, for all that I disagree with, this is a major step forward.

So how is it a catastrophe? Because it wasn’t sponsored by your party? Because it doesn’t push forward your own personal, get-reelected agenda?

I ask you this question in particular because, for all of your blathering about what’s wrong with the Affordable Care Act, neither you nor your party offered any alternative.

And since it appears that you have no interest in a rational dialogue about this issue, but only that you wish to cast aspersions on your opponent — in this case, President Obama and his clearly successful Affordable Care Act — I can come to no other conclusion than that you are a demagogue.

As a citizen of this great country, one who looks beyond party affiliation to our common good, I say, shame on you.