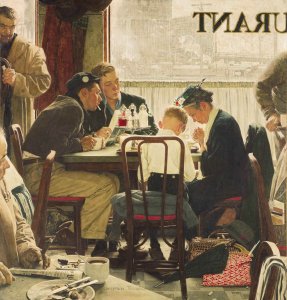 Once in a while, I long for the life I had as a child in a small town in western Nebraska. I loved that little town of Bridgeport. With a bicycle and permission from Mom, the whole town became our playground. The North Platte River was close by and we wandered for hours at a time in the river bottoms, oblivious to whose land we were trespassing on. On summer evenings the whole block was the field for a serious game of hide and seek. I remember shopping with my parents at the hardware store that was also the furniture store and the appliance store. There was one barber in town; Dad and I would walk down together to get a haircut. I loved the visits to the lumberyard, especially if it meant going back to the yard to pick out the boards Dad needed for some project; that’s where I learned to love the smell of freshly sawn lumber. The Rexall drugstore smelled like a drugstore and it’s where I bought comic books and magazines.  When I went to seminary to become a pastor, I imagined myself returning to such a place.

It hasn’t worked out that way. I’ve served my entire ministry — a few months shy of 30 years now — in the suburbs of major population centers. Deep inside, a mostly dormant longing is still lodged to return to a place like the place where I grew up. The longing becomes more acute when the frustrations and burdens of serving a large suburban parish overwhelm the joys and satisfactions of my work.

Years ago in one of those points of frustration and burden, I said to a clergy colleague and close friend (who had just retired from parish ministry, a point not irrelevant), “I’m going to resign my call and find a little church in the middle of nowhere.”

My wise friend responded, “No, you’re not. I know you better than that. That’s not who you are. You would go mad if you didn’t have the stimulation and challenge of the ministry that you’ve been called to. You have been called to this place for a reason. Stop yearning for a life that doesn’t exist except in your own mind.”

I think about that conversation a lot, especially the part about a life that doesn’t exist except in my own mind.

I think about that conversation with respect to the current campaign season. Listen to the candidates. The speeches start with a story of what things used to be like, and always the past is golden, a time when unions were strong or America was great. “Just elect me,” the storyline goes, “and we can return to that golden age.”

I think of that conversation with respect to the church. Congregations have been thrown into a state of anxiety as once prosperous and successful institutions look back on the glory years of the mid-twentieth century when they were strong congregations, pews and coffers and Sunday school rooms full. Now, struggling to keep their doors open, they hope that by calling a new pastor or getting a few new members they can return to the good old days.

Which, of course, is never going to happen. The world is different. The America of the mid-20th century which saw the US as an unrivaled global power, brought prosperity to millions of people, and saw the unprecedented expansion of the middle class doesn’t exist any longer. That we are no longer the America of the 20th century and cannot return to that time and place seems obvious, yet as a people, we talk not only as if that’s possible, but that it’s precisely what we need to do. (As an aside, access to that prosperity belonged primarily to white Americans.)

The symbiotic relationship of the church and culture that allowed churches to grow and enjoy substantial stability and institutional prosperity does not either exist anymore.

Bluntly speaking, get over it. We don’t live in the mid-20th century. That world doesn’t exist.

I wish our national leaders could speak honestly about the futility of nostalgia as as operating principle. I wish by some fiat, we could all agree that nostalgia might be a delightful way to spend an evening with family or friends, but it’s not a productive way to address the substantial challenges we face as a nation. I wish the candidates would give us their assessment of the challenges we face today and use their imaginations to articulate their version of policy to address those challenges. Of course, the polices on the right and left would look very different. But wouldn’t it be fun to debate actual solutions that take into account the nowness of our challenges and quit trying to repristinate a world that cannot exist anymore?

In the congregation I serve, mostly we have come to an awareness that 2016 is not the same as 1976 and that if we want to be part of God’s mission, we need to be different and do differently. It’s not to say there isn’t anxiety; there’s plenty of it. I still get people asking me why we have to change when what we’ve done has worked pretty well for us. Even folks who aren’t asking those nostalgic questions still long for the days when Sunday school rooms were packed, 150 kids showed up for Vacation Bible School, 60 kids showed up for the midweek kids’ programming, and the sanctuary was full for 2 services every Sunday.

In letting go of the past, we open up space to look realistically and hopefully at the world we live in today. When we open that space, we find the energy to look — really look — at the unique challenges and opportunities in the present moment. Then we begin to think imaginatively about how we might address the challenges of the now.

In so many of the gospel lessons we’ve read this summer in our Sunday services, I’ve heard Jesus’ words in light of this lens through which we look at our mission and our challenges. When Jesus began his ministry, he set his face to Jerusalem. He went about his ministry with urgency, resolute determination, and a refusal to be distracted. When those he called wanted to go home and say good-bye first, Jesus cautioned, “No one who puts a hand to the plow and looks back is fit of the kingdom of God.” When he sent his disciples out two by two, he told them to look for welcome and then to stay as long there is work to do and then move on. When he taught his disciples to pray, he told them to ask that the kingdom come (present tense).  He told them to ask for enough bread for the day. There were no words about longing for the bread of the glory days, a sin which the Israelites perfected in their wilderness wandering.

I’m not suggesting that we disregard or dishonor the past. The saints of Faith Lutheran Church whose shoulders we stand on were faithful, energetic, and dedicated folks who established a vibrant ministry that has had an immeasurable impact on thousands of people and the community in which we serve. We can honor and give thanks for the past without attempting to recreate that past.

Like my own longing for my childhood home, there must be something deep within the human psyche that longs for the good old days. I happen to think that the good old days exist mostly in our minds, but even if they were as good as we remember, they aren’t coming back. The sooner we let them go and start really paying attending to the world of now and imagining how we might address the challenges of now, the better it will be for us, for the world, and for all of creation.

Postscript:  The notion of nostalgia as an operating principle for politicians is developed much more fully in The Fractured Republic: Renewing America’s Social Contract in the Age of Individualism, by Yuval Levin. I highly recommend the book. Written by a conservative scholar, the policy solutions Levin offers are not the ones I would support, but he is very fair and balanced in offering both critique and pathways forward for both Democrats and Republicans. He advocates for restoring the strength of mediating institutions, institutions like churches, synagogues, mosques, schools, and neighborhood organizations. This is precisely what the work of broad based community organizing does.