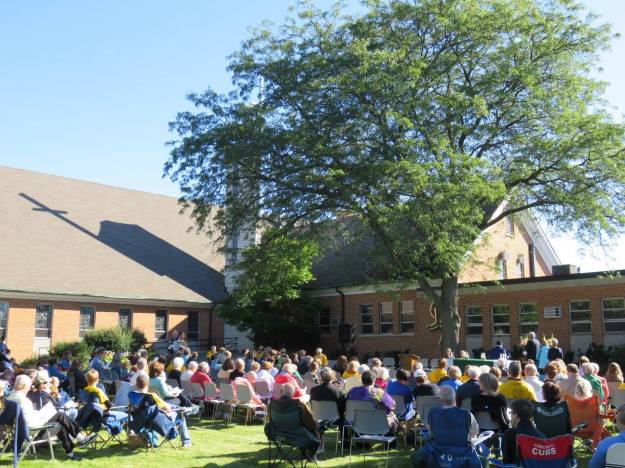 About that tricky, risky relationship between pastors and congregations? I often hear a tale of dysfunction, hurt, suspicion, betrayal. . . you get the idea.

I have a different story to tell.

When our granddaughter, Eliana was born on February 17, the elation at her birth quickly turned to uncertainty and concern. When our son first texted us with the message of her birth, he told us that she had been transferred to Lurie Children’s Hospital; there was something wrong with her skin. My immediate reaction was concern, but only mild. “Probably something minor that will be taken care of in a few days; she’ll be home soon.” That’s what I told myself. It wasn’t true. Eliana was born with epidermolysis bullosa, a rare and serious skin condition. Eliana died on April 16, a day shy of her 2 month birthday.

Those two months were filled with a range of emotions, uncertainty, heartache, exhaustion, anger, sadness. . . Through it all, the people I serve with at Faith Lutheran Church demonstrated to me what church is.

When I first announced to the congregation Eliana’s condition, and especially that it was serious and potentially life-threatening, I asked them to give Sheryl and me some space as we tried to process and come to some understanding and acceptance of what this all meant. While they were curious and wanted to know so much more, they honored that request. A few weeks later when I indicated that I was ready to talk about things, they reacted in such a caring way, offering kind words of support and  constant prayer. On the Sunday that I first announced Eliana’s condition, our retiring congregational president emailed me with words to this effect: “you take whatever time you need. Let go of little things; not everything needs to be done. And we will cover what has to be done that you can’t do.” We had a council retreat just 10 days after Eliana’s birth, and the council surprised me with a collection of gifts for my wife and me, for our son and daughter-in-law, and for Eliana. Our newly elected council president said to me in front of the whole council, “You need to know we have your back. This is an important time for you. Do what you need to do. We have your back.” (It brings tears to my eyes remembering that moment.) Through weeks of trying to be present at the hospital and also keep up with my work, members of the council provided gas cards, train tickets, gift cards for meals and coffee, cards, letters, notes, emails — so much that I can’t even remember it all.

And the staff that I work with? Simply amazing. Nearly daily, my co-workers stopped by the office with a hug, a kind word, a card or note, a Starbucks card, and the never-ending assurance that they were praying for me, for our family, and for Eliana. And they spoke her name to me. That became more important than I knew at the time. More than words and gestures of encouragement, they took over things that I normally do. We have two midweek bible classes and I usually teach at least one of them each week, often both of them. They completely took those over. They offered to do Sunday preaching. We were entering into a major discernment campaign, a project with which I intended to have close involvement. One of our staff members and a lay leader completely took over that planning. Those conversations have start this week, and what my colleagues in ministry have planned is bearing fruit in powerful and meaningful gatherings.

Eliana lived her entire life in the Neo-natal Intensive Care Unit at Lurie Children’s Hospital. I am not privy to what her medical bills were, but it must be extraordinarily expensive. A couple of staff members set up a Go Fund Me account so that people had a vehicle for helping Chris and Liz with their medical expenses. The people at Faith were generous beyond my imagination.

After Eliana died, it became clear that my relationship with the people of Faith was anything but superficial. People here grieved deeply with us. They cried with us, they shuddered with us at the death of an infant; they helped carry our sorrow, our sadness, and our anger.

What happened at the funeral was a moment full of light in the midst of deep darkness. Though my son is a pastor, he and our daughter-in-law asked that the funeral be held at Faith. We anticipated a large attendance, larger than his small congregation would have been able to host.  When the people of Faith got the news that we would be hosting the funeral, they went far beyond what I could have asked for or imagined. We had teams of ushers, communion servers, acolytes, greeters, altar guild servants, who made sure everything for the service was just right. Our music director recruited a choir and made sure the music was excellent. People were volunteering to help with the reception even before our funeral coordinator could send out the request. My staff colleagues took care of details to make sure I had time and energy to prepare for the service and be with my family.

There are a thousand more things I could name.

I am by nature an independent person. For most of my life, when I have a problem, my default position is to solve it myself. Add to that the fact that I am a problem-solver and will help others solve their problems, even as I sometimes ignore my own. When I am hurting, it has been difficult for me to ask for help and difficult for me to receive care from others.

Somehow this was different. I don’t know that I explicitly asked for care from the congregation I serve with, but they gave it and I received it. The love that I believed they had for me as their pastor was demonstrated in such depth and concreteness that it has taken me by surprise. They have loved me. They have cared for me. They have carried my burdens and made them their own. They have shown me what it means to be church.

Something that I’m having a hard time putting a finger on has happened in our relationship. There is a strength and trust that is palpable. I am so grateful beyond my ability to express. I didn’t know that church could be this good or this meaningful or this sustaining.

I want the whole world to read this word of tribute: Dear People of Faith Lutheran Church, “I thank my God every time I remember you.”

3 thoughts on “In Praise of Church Being Church”