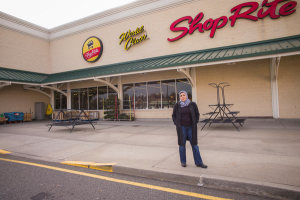 There was once a woman wearing a hijab who was doing her weekly grocery shopping at her usual grocery store near her home. As she headed down the detergent aisle, a couple of middle-age white men made angry comments about her religion and ended with an obscenity to describe the woman and others of her religion. The woman went to the customer service counter and said, “I’m not done shopping,” she told him, “but I don’t feel safe here.”  The assistant manager told her he would protect her. For the next half-hour, he walked alongside her pretending to check inventory as she did the rest of her shopping. When asked about his actions, he said, “I was just doing my job.”  (Read the whole story by New York Times religion writer, Samuel G. Freedman.)

1. In these times, we are told to be vigilant for things that are out of the ordinary. If you see someone suspicious, call the authorities. When we’re cautioned so often to look for the suspicious, does every stranger begin to look suspicious?

In my Christian belief system, God has called me into the circle of God’s love and transformed me. God has made me part of a community that is to be good news for the world. Being good news for the world is not so much about having the right answers, but about being God’s loving presence. To be God’s loving presence is not that complicated. It may be hard, it may take patience, it requires persistence, it is undoubtedly counter cultural. But at it’s heart, it’s not that complicated. Exercise kindness; be neighborly; assume a shared common humanity in the midst of the differences.

That assistant manager? His name is Mark Egan. If God is at work bringing the peaceable kingdom — and I believe God is — Mr. Egan has given us a glimpse of what that might look like.