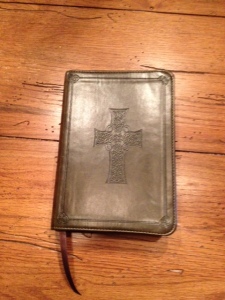 It’s like that car crash that we can’t not look at. We all want it to go away, yet we keep looking.

That county clerk in Rowan County in northeastern Kentucky has now become the poster child for what some are calling a courageous stand for religious freedom. Her supporters are cheering for her version of Christianity, citing biblical support for her defiance, claiming that she is a righteous woman who is properly obeying God in the face of a law that would require her to sin were she to follow it. Her cause has been picked up by at least two Republican presidential candidates, Mike Huckabee and Ted Cruz; they appear ready to canonize her as an icon for what they would like this country to be.

Here I sit. An adherent of the same religion, at least in name. A leader in the church. I see her defiance very differently, not as something that brings honor to her faith, but distorts and diminishes the heart of Christianity. She willfully is disregarding the oath that she took when elected as County Recorder. I don’t have so much an issue with that fact that she disagrees with the Supreme Court decision legalizing same-sex marriage. That is her constitutional right. But if her conscience dictates that she can’t do what her job and her oath of office require, then she should resign. Instead she has chosen to grandstand and drag the whole country into this fake debate about religious freedom and a drama that is mostly irrelevant.

It is so striking to me how adherents of the same nominal Christian faith can come to such polar opposite conclusions about her actions, and more fundamentally, about the issue that prompted her grandstanding. Mike Huckabee is an ordained Baptist pastor and was the pastor of a large, successful Baptist church before going into politics. Ted Cruz grew up in the church; his father was the pastor of a large, successful fundamentalist-leaning church. Cruz is graduate of Princeton first, and then Harvard Law School. These are not stupid people.

While I don’t carry the educational credentials of Cruz, I am a leader in the church and called on almost daily to articulate the Christian faith. I come to vastly different conclusions about Davis’s actions, about gay marriage, and I suppose about nearly every other aspect of Christian teaching and Christian life. How can that be?

Earlier this summer, I read The Righteous Mind, a fascinating book by Jonathan Haidt. Haidt is a moral psychologist and the book sets out to describe how persons shape their moral universe. The common understanding is that people find their fundamental moral principles — often in their faith and their own sacred texts — and then arrive at actions and beliefs that are reasoned from their fundamental moral principles. So, for instance, if we are adherents of Christianity, we look at what the bible has to say about moral issues, the voice of the bible leads us to our moral principles, and then we determine our actions based on those principles.

But Haidt suggests that this isn’t the way it works. Using a wide array of theories, research and experimentation, he describes how people intuit moral positions and then go in search of a moral framework to support their position. So, for instance, if I have an intuitive disdain for homosexuality, that decision is made “in my gut” as Haidt describes it, and then I go in search of support for my position. Did you get that? Let me say it another way: we go looking for divine support for positions that we have taken intuitively.

I’m no expert on psychology, and so I can’t evaluate Haidt’s thesis as an expert. But he does make a compelling case. It strikes me as a cogent argument for, among other perplexing questions, why adherents of the same religion come to such different moral conclusions.

But it also shakes religious foundations to the very core. What could it mean if we do not, in fact, base our moral principles on our sacred scriptures, but on our intuitions that have been shaped by our upbringing, our culture, and even our personality? What then, could Christianity possibly be about, if not a moral code for righteous living?

As far as I can tell, Christianity has never been a moral code. it’s always been about a relationship and a calling. It’s about a recognition of our brokenness, a transformation that comes through Jesus and results in a dying to self and a rising to a new relationship with God, and then a calling to be in the world in such a way that you love God and love your neighbor. Morality? That’s something different.

That fundamental core of Christianity is so easy to forget. We want to be the good people. To be the good people requires knowing the rules. Knowing the rules means you have to make the rules. Then you can tell everyone else what the rules are. And if you don’t like the rules, then you make a different set of rules. And then we get to the kind of saga that is getting played out on our television screens and Facebook feeds, such a distortion of Christianity that I can’t even recognize it.

Here’s to believing it’s not about the rules.

3 thoughts on “What If It’s Not about the Rules?”