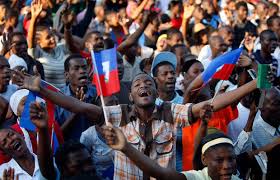 I wonder if Donald Trump has ever been to Haiti. I guess it’s not impossible; still, I’m gonna put it in the category of unlikely. It would not be a pleasant place for a reported germaphobe; I doubt if Port-au-Prince is in the running for a Trump luxury hotel.

I have been to Haiti. I don’t want to sugarcoat it. It’s tough.

I immediately knew I had entered a different world when the jet that I boarded in Miami landed in Port-au-Prince and stopped in the middle of the tarmac; we climbed a stairway to the ground and walked to the terminal. Once inside the terminal, the luggage conveyors weren’t working; I later learned that they had never, ever worked, even on the day the terminal opened. Instead, the baggage handlers opened the double glass doors on one wall and stacked all the luggage right there. We were on our own to sift through the luggage to find what belonged to us.

In the several trips I made to Haiti, our drivers always carried extra cash. Seeing white people in the car dramatically increased the chance that our car would be pulled over. The only way to avoid a ticket or arrest was to have ready cash to pay off the police officer.

I heard a story — apocryphal perhaps — that once Mother Teresa was asked what it’s like to work in the worst slums in the world. The interviewer, of course, was referring to the Calcutta slums where Mother Teresa was doing her work. Reportedly, she replied, “I don’t know. Ask those who are working in Cite’ Soleil.”  Cite’ Soleil is a densely populated, extremely impoverished commune in Port-au-Prince. Estimates of the population range from 200,000 to 400,000. The shacks — one is hard pressed to call them homes, though they serve as homes to these poorest of the poor — are made of whatever can be scrounged, plywood, cardboard boxes, scrap tin. The dense population means that there aren’t enough beds for everyone, and people sleep in shifts, which means that at any given time, day or night, someone is sleeping and someone is out on the dirt alleys that run through Cite’ Soleil. On the day I visited Cite’ Soleil, children were bathing in what I would generously call a big mud puddle.

I could go on, but you get the idea. Haiti is a poor country, the vast majority of whose people barely eke out a living. Corruption and dysfunction are the primary descriptors of the basic structures and institutions.

But to acknowledge that reality is very different than saying Haiti is a shithole country.

First, let’s acknowledge how they got there. Haiti was a French colony. The French imported slaves from Africa to work the sugar cane fields that supplied Europe with their 18th century newfound obsession with sugar. The French colonialists and plantation owners were making money hand over fist, not because the cultivation and production of sugar cane was so inherently profitable, but because it was profitable when you didn’t have to pay the workers who were doing the hard, grunt work in the fields. Slave labor wins again.

In the closing years of the 18th century into the dawn of the 19th century, the Haitian/African slaves launched what historians describe as the only successful slave rebellion that led to the formation of a sovereign state governed by those who had formerly been enslaved. Over the next few hundred years their relationship with Europe and the Americas demonstrated that the white colonial powers were determined to insure that what happened in Haiti, would never happen again. Haiti became a pariah in international relations.

Here’s a little known tidbit of the United States relationship with Haiti: President Thomas Jefferson’s deal with the French government that is popularly known as the Louisiana Purchase likely would never have happened without the successful slave rebellion in Haiti. Jefferson wanted to purchase the territory, but the US was experiencing its own economic and political instability. Jefferson was ready to offer the French an amount that his entire administration had little hope would be accepted. At the same time, Napoleon sent three armadas of ships and soldiers across the Atlantic. One was intended to retake Haiti for France, and the other two were headed for New Orleans to reinforce the French presence in the New World. When the Haitians repelled the first wave of French soldiers, Napoleon redirected the other two to Haiti to finish the job the others failed at. As it turns out, the Haitians repelled all three French offensives. Napoleon, desperate for cash, offered Jefferson the Louisiana Purchase at a cost far below the lowball offer Jefferson had intended to make. (I learned that story in chapter 3 of The Half Has Never Been Told: Slavery and the Making of American Capitalism, by Edward E. Baptist. I’m sure you can also find it elsewhere.)

The relationship between the US and Haiti is complicated and open to interpretation. I acknowledge that. I also acknowledge the brutality of the father and son Duvalier regimes. Still, the US is not without blood on its hands. Most historians agree that US policy with regard to Haiti has been more about politics than about improving conditions for the common Haitian citizen. The various economic embargoes through the years may have served to make a political statement, but they did not bring improved economic and social conditions.

For much of the time I was involved in work in Haiti, we partnered with a woman who ran an orphanage and school that she had built with her own savings from her work as a domestic in the US. Marie had moved to Miami as a young woman and worked for a wealthy family as their housecleaner and occasionally providing child care. She saved money and eventually bought a modest home. On a trip back to Port-au-Prince to visit her brother, she was walking down an alley and heard whimpering which she at first thought was from puppies inside a nearby garage. What she found when she looked in the window was a family of children who had been abandoned by their parents.

Marie never went back to her home and job in Miami. Instead she bought a home in a Port-au-Prince suburb where she cared for those children. In the meantime, she began taking in other abandoned children from the neighborhood. She eventually built another building so that her orphan children could go to school, a building that quickly became a school for the entire neighborhood.

Until my congregation became involved in supporting her school, Marie did this all with her own money, her own savings, along with the proceeds from the house she sold in Miami. I don’t want to sugarcoat Marie’s work. She made mistakes and so did we. We learned as we went along. I would do things differently now, knowing what I know. But Marie did the best she could with what she had, all with the laser sharp focus to care for children who had no one else.

Marie is an icon for what I found consistently in the Haitian people I met. She was a person of deep faith, believing that she had no choice but to care for her neighbor and that somehow God would provide. She was generous to a point that Americans might say she was reckless. She did not hesitate to pour her own resources into the preservation and thriving of children that she had never met, with whom she had no biological connection, children for whom she might reasonably had said were someone else’s responsibility.  She was incredibly resilient and resourceful, oftentimes making silk purses out of sow’s ears.

It is shamefully easy to call Haiti a shithole country. It’s also shamefully shallow, racist, arrogant, and woefully ignorant of our complicated history.

I wish for a more compassionate response that would acknowledge the human suffering of our neighbor and our own complicity in the brokenness of Haitian institutions. I wish for a Haitian/American partnership that could bring real improvement for the extraordinary Haitian people. At the least, I wish for simple respect.

5 thoughts on “I Have Been to Haiti”