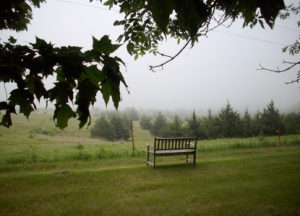 A few weeks ago, Joanne Cleaver had a piece in the Chicago Tribune that was little more than a rant about the pretentiousness and relative inconvenience of staying at a bed and breakfast over a chain hotel. Of course, she’s entitled to her opinion and her choice about where to stay. I’ll go on my mini-rant here about lumping all B & B’s into the category of “pretentious.” I’ve had good and bad experiences at B & B’s, just as I’ve had good and downright rotten experiences at the chains. And of course, never mind all of that, I still retain my bias toward using local businesses as much as possible.

As an counter to Cleaver’s nightmare experience at a pretentious B & B in Vermont, here’s what I experienced a month or so ago on a visit to see my mom in Nebraska.

Driving rural roads just outside Valparaiso, Nebraska, I found the number on the mailbox and drove down the long lane and into a grove of trees and a circular drive with a house on either side of the circle facing each other. When a tall, thin older man came ambling along the driveway with an armload of tomatoes in tow, I announced, sheepishly, “I’m looking for the B & B.”

“Oh, you must be looking for Harriet,” he said, adding, “You have the right place.”

Jack and Harriet Gould welcomed me with a fine measure of midwestern hospitality. They showed me to my room where I was able to settle in and relax for the evening. I also met Jack’s brother, Don, who lives in the house on the other side of the driveway. Over the course of the next few days, I was able to piece together the interesting story that lay behind the gracious hospitality of my hosts.

Don and Jack grew up in Philadelphia. Don graduated from Penn State with a degree in animal husbandry and came out to Nebraska to farm. He was able to buy enough land to get started and began by growing and selling Christmas trees. Eventually he added cattle, and it was the cattle that for the rest of his career would serve as the centerpiece of his operation. Over the years he bought more land and rented the cropland out to others who had more of hankering for that side of farming.

Jack and Harriet were teachers. Early on, they out and spent the summers in Nebraska, Jack  helping out his older brother. Eventually Jack and Harriet moved out and built a house on the same land. After teaching for a few years (and coaching football for many more, as I understand it), Jack became a full-time partner in the cattle operation. After their two daughters started school, Harriet returned to teaching in Valparaiso and eventually became principal.

On the last day of my stay 6 of us sat around the breakfast table.  Let me add that the breakfast table was not merely breakfast, but a breakfast feast that bore a resemblance to a Thanksgiving feast. The table was set elegantly with china and crystal. Before breakfast each morning there was coffee and sweetbread as an “appetizer.”  Breakfast on Saturday was a scrumptious egg casserole and sausages wrapped in bacon (remember, this IS Nebraska!), fresh, warm biscuits and a giant bowl of fruit. Both mornings I was there, I had enough breakfast to skate right through lunch to dinner before I needed to eat again. But I digress.

Six strangers plus hosts, which makes 9, sitting at breakfast on that Saturday morning provided the setting for some stimulating conversation. Turns out Jack is deeply involved in Common Cause, a notational citizen’s lobby organization that works on behalf of citizens for open, honest, and accountable government. One of the guest’s father had been a Nebraska state senator who eventually turned to a career as a lobbyist. It was extraordinarily interesting to hear them share their stories about competing sides of the citizen/politician divide. She talked about how her family had been the recipient perks that comes along with a career in politics. Jack had spent much of his adult life working against those kinds of undue influences on the part of the corporate world.

On the morning I left, Jack and I stood in their kitchen and talked on and on about his work in Common Cause and my work as a pastor and leader in broad-based community organizing and the many intersections in our work. Though we have channeled our energies and commitments through different organizations, what we share is a passion that our country’s democracy work for common people. I left that B and B and that conversation with deep gratitude for the connections made and the relationships established with a few great salt-of-the-earth people who are shining the light into the dark corners of the world where they live.

I may never cross paths with the Goulds again. I hope we do. Even if we don’t, my life is better for having made their acquaintance.